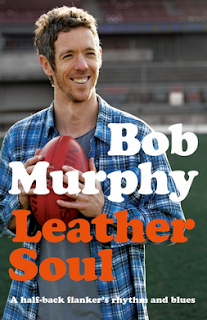 Have I mentioned that I love Bob Murphy? A writer's footballer, he earned his stripes as a quirky commentator for The Age newspaper in a series of delightful, left-of-centre columns that sometimes concerned his sausage dog Arthur or buying coffee rather than the usual earnest ruminations or boasting of some player/analysts. Those columns were collected in Murphy's Lore.

Leather Soul: A half-back flanker's rhythm and blues is a meandering memoir, with memories of a carefree childhood interleaved with a diary of the Western Bulldogs annus mirabilis, 2016, when they joyously, unexpectedly, snatched the premiership with a month of magnificent football. But poignantly, Bob himself, captain of the team and its heart and soul, wasn't able to play in that premiership team because of injury. On Grand Final Day, when the coach called Murphy up onto the dais and put his own premiership medal around the injured captain's neck, it was a moment of the most perfect love and sportsmanship, a bittersweet and precious gesture.

Bob is honest about how much missing out on that year hurt him; he put on a brave face all year, swallowed his pain and gave whatever support he could to 'his boys.' But the pain didn't go away. He is honest about his own failings (even though the conventional wisdom in our house is that he is a perfect human being!) when it would have been easy to leave out those incidents from his story. Maybe that makes him even more perfect, who knows!

If you're not a Western Bulldogs supporter, or at least an AFL football fan, you probably won't pick up this book. That would be your loss. Get to know this lovely, wise, funny man, who happens to have played wonderful football for half his life, a little better. You won't regret making his acquaintance.
Posted by A latte beckons at 12:46 PM