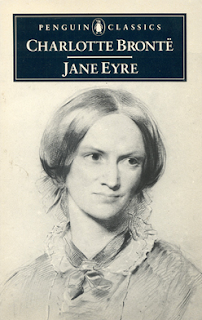 Reader, I finished it...

I didn't tell you I was reading this one, either, did I? I hid it from you, somewhat as one might hide away a mad wife in an attic. In fact I've been reading Jane Eyre very slowly, on my iPhone, on trams and in waiting rooms, for a few months now -- what would Charlotte Bronte have made of that? A tiny lighted screen, containing numberless novels, slipped into a handbag or a pocket: what a luxury!

I've always been more of a Jane Eyre fan than a Wuthering Heights girl. Being little and plain and often overlooked myself, I felt that Jane was a kindred spirit, and I still admire her spunk, her self-possession and her refusal to compromise. Some aspects of the novel are hard to read, almost two centuries later. Poor mad Bertha, locked away to rot like a wild animal. Poor little illegitimate Adele, with her 'French defects.' Poor St John Rivers, captive to his merciless God. Poor Rochester, utterly selfish, patronising and obnoxious. A modern Jane would surely never settle for him.

And yet I'm here to tell you that Jane Eyre is still a bloody good read. Well done, Charlotte.