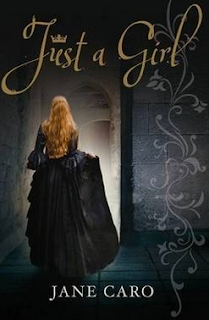 I'm a big fan of Jane Caro, I love her columns in The Age and I love her forthright, no-nonsense appearances on Gruen and the Agony series. Apparently she may be running against Tony Abbott at the next election, which gives me huge delight!

It turns out she is also a bit obsessed with Elizabeth I, and she has written a trilogy of YA novels about her life. Just A Girl is the first, and covers young Elizabeth's life up to her coronation at the age of 25. It's a fascinating story, and Caro does an excellent job of keeping track of a large and confusing cast of characters by focusing closely on Elizabeth herself. The story is told in retrospect by Elizabeth as she waits for the dawn of her coronation, and occasionally this device creates a slight distance to her account: almost everything is told, not shown. Some of the dialogue is taken from Elizabeth's own words, which is a nice touch. The novel really comes to life during some of the big set-piece scenes, like Elizabeth and her sister Mary arriving in London to the acclamation of the crowd when Mary becomes queen, or Elizabeth being transported to the Tower of London in pouring rain. These scenes pull us right into the moment, and I would have liked more of them.

This is a terrific introduction to a complex era in English history, and a complicated character.