How To Write A Novel Using the Snowflake Method 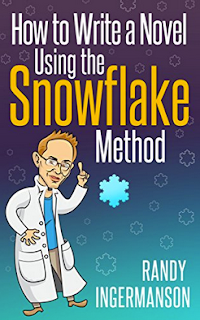 I can't remember exactly when or how I discovered the Snowflake Method. Probably I was stuck one day and in despair googled 'how to write a novel.' I came across Randy Ingermanson's website, which contains a skeleton outline of his theory. The basic premise is that you can build a snowflake, an incredibly complex and intricate structure, by building upon a simple shape that becomes more elaborate with each step. Therefore, you can build a novel by starting with a simple sentence and elaborating it until -- ta da! -- you end up with a book.

Over the years I have found the snowflake method very useful, generally when I've amassed a messy pile of material and ideas, but I'm having trouble shaping it all into a coherent form. The first step is to summarise your plot in a single sentence -- easier said than done! I have found this incredibly productive when I'm attempting to decide exactly what the hell this story is supposed to be about. (Think of this as the description of your book when it appears in the bestseller chart.) The next step is to summarise your story in a four sentence paragraph -- replicating a four act structure, each act ending in a disaster. Now this might not suit your novel, and it doesn't always suit mine, but the paragraph summary is also a useful tool (think of it as the back cover blurb of your published book). Then you start on character work, and from then on you alternate plot and character steps until by step nine you have a list of scenes and a plan for each scene. Then all you have to do is start writing!

I've never done all the steps, and I find some more useful than others. For instance, when it comes to Step 7, I replace Ingermanson's "Character Charts" with a monologue in that character's voice. But this time, I was starting to piece together some ideas for a junior fiction novel and I saw that Ingermanson's manual was only $4 on the Kindle, and I thought, what the hell, why not try and do it properly this time?

So I did. And it was good. I still adapt Step 7 into my monologues, and while I write a Step 8 Scene List, the Step 9 Scene Plan doesn't work for me and I abandoned it halfway through (I did give it a crack though). I spent about a week doing the Snowflake. And now I've started writing!