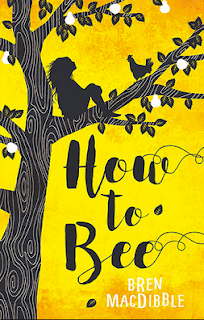 Bren MacDibble's How To Bee took out the Younger Readers CBCA Book of the Year award last year, but even before that I had seen its gorgeous golden cover everywhere.

Peony lives on a farm with her sister and grandfather, after some near-future apocalyptic event known as the Famine. They work hard for their Foreman, and live simply, but they have enough to eat (just) and each other. Peony's mother works in the city, and returns occasionally with money; but then, expecting a baby and unable to work as hard as she's expected to, she decides that Peony should come back with her. Mother and daughter work as servants to a rich family, but rich girl Esmeralda suffers from debilitating fear of everything. Can brave, smart Peony teach her courage, and will Esmeralda repay her friendship with freedom?

I can see why How To Bee won all its awards. The voice of Peony leaps off the page, lively and distinctive. I bet this book was unlike any other the judges read last year. At its heart, this is a story about friendship and family, and it comes full circle in a very satisfying way. I loved its recognisable Australian-ness too, and with its city streets filled with desperate beggars, this imagined future didn't feel too far away.