The Girls of the Rookery School 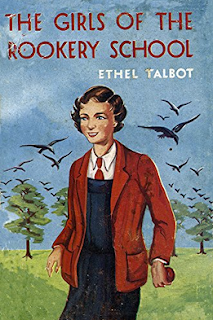 Ethel Talbot has been safely dead for seventy five years, so I'm sure I won't offend her when I say that her 1932 novel The Girls of the Rookery School is NOT a good book.

Just look at that gawp, Peggy, on the cover, with her gormless expression and the cricket ball hidden in her hand. Do you think it's possible that this sickly dweeb, expressly forbidden to play games after fainting while running across the Downs near her new school, could ever secretly develop a gift for tricky left handed bowling? Do you think that said dweeb might get the chance to save the day in the very last match of the season, against the 'literal Amazons' of Dean House, when her best chum Irene has to be subbed out with smashed glasses? Do you think that the very sporting captain of the Dean House team will agree to allow the opposition team mascot to bowl the last few balls of the match, so that Peggy can skittle their best batsman? You bet she will, despite the fact that, while batting substitutions are a long-established tradition in cricket, bowling substitutions are, to say the least, unusual.

But that's the least of the implausibilities in a plot which contains a stolen ruby, yokels who speak in laborious dialect ("Rookses is queery birdies, to be zure, liddle missie..."), a long-ago scandal and students who are so terrified of an Inspector's visit that they speak of little else for a whole term. We are told about five times in the opening chapters that the character of Polly is always called "Flinders", after which she is called Flinders ONCE and otherwise known to everyone as... Polly.

There is also this priceless passage:


Polly was telling everything before another moment had passed. All about the last weeks' unhappiness. In the cloakroom their arms were round each other; their hot cheeks were pressed together; they were kissing each other for the first time.

Alas, it's not another contender for Jenny Pausacker's excellent list, just a rather over-heated reconciliation.

Oh, and does Peggy find the lost ruby? What do you think?