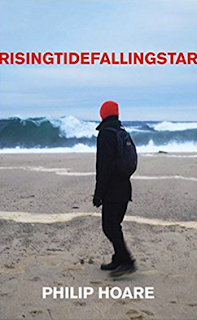 I borrowed Philip Hoare's Risingtidefallingstar from the library purely on the recommendation of The Reluctant Dragon, because Susan and I seem to share similar tastes!

This is one of those books that is difficult to classify. It's part memoir, part nature study, part philosophical musing, part biography, all twining around the subject of the ocean. Hoare recounts the personal histories of various figures (Herman Melville, Elizabeth Barrett Browning, Stephen Tennant, Wilfrid Owen and others) whose lives were shaped by the sea in different ways, finding unexpected echoes and resonances between them, across time and space.

But this is also a very personal story about Hoare himself and his own obsession with the ocean (he has written two previous books about the sea). It's also a love letter to David Bowie in The Man Who Fell to Earth (though neither the film nor the performer is named).

Risingtidefallingstar is a meditative book which kept surprising me, like a wave rising up underneath you. The best way to approach it is just to spread your arms, lie back and surrender, and let it drift you where it will.
Posted by A latte beckons at 11:22 AM