The Boy At The Top Of The Mountain 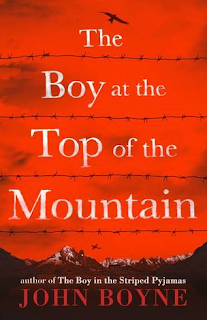 Let me get this out of the way: I have never read a John Boyne book that I've liked. I loathed The Boy in the Striped Pyjamas. The Boy at the Top of the Mountain is not as bad, but I still didn't like it.

John Boyne has been hugely successful (also hugely reviled, most recently for the trans-themed My Brother's Name is Jessica) so he doesn't need my praise or support in any way. I'm only reading this book because it was suggested for our list by a new member of the Convent Book Group, who has now left! (The topic is War.)

The Boy in question is young Pierrot, son of a French mother and German father, who is taken in by his German aunt Beatrix when his parents die. Beatrix just happens to be housekeeper at the Berghof, Hitler's country retreat, and Pierrot, now known as the more Germanic Pieter, quickly falls under the Fuhrer's spell.

The point of the book is to show how easily an individual can be seduced into a corrupt and obnoxious philosophy, and I guess that is a worthy aim. But there is something about the nudging style of Boyne's writing, where the adult reader is always in on the joke (not that it's a joke), that I find really off-putting. We know the mysterious master of the house is Hitler, we know why Pierrot is forbidden to mention his Jewish friend, we know why the showers in the planned concentration camp will have no water. The young readers might not guess these things, but in their ignorance, will they feel the full horror of the big reveal? It feels as if Boyne is having a bet each way, laying clues that only make sense if you already know the secret; if you don't already know, you won't actually learn anything.

This gets to the heart of my objection to Boyne's books. I'm sure it's well-intentioned, but it just feels too cutesy to be playing games like this with such serious subject matter. It makes my blood boil!