Through the Language Glass 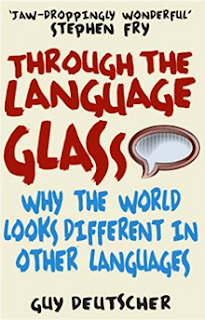 The younger daughter begged me to order Guy Deutscher's Through the Language Glass for her, prompted by Stephen Fry's fulsome endorsement (see above: 'jaw-droppingly wonderful' and 'left me breathless and dizzy with delight').

Well, suffice to say that both the daughter and I felt that Stephen Fry had gone a little overboard with his praise this time. She slogged through it first, heroically sticking to her routine of one chapter per night (the chapters are quite long), then handed it to me. That was months ago, but I've finally managed to push through to the end.

This is not a terrible book, by any means. The subject matter is fascinating (how does the language we speak influence our perception of the world?) and Deutscher does his best to jolly us along with linguistic humour. But it's a thorough (some may say, too thorough) survey of a quite dry academic field, and its conclusions are fairly underwhelming, to wit, yes, language does influence some aspects of how we perceive the world, but not much, and only in certain areas (colour, gender, spatial orientation).

Probably the most interesting section dealt with one Australian Aboriginal language (Guugu Yimithirr) which requires its speakers to take note of the compass directions whenever they describe the position of something. So instead of saying, 'there is an ant to the right of my foot,' they would say, 'there is an ant to the south-west of my foot.' This means they are constantly, unconsciously orienting themselves geographically in their surroundings. That would be a handy skill to have.