Between A Wolf And A Dog 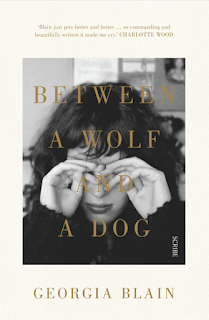 What a beautiful novel. Also borrowed from my friend Christine, this is the first time I've read Georgia Blain's writing. I was aware of the tragic irony of her story, that she'd just finished writing a novel about a woman dying of a brain tumour when she was diagnosed herself with the same kind of aggressive, incurable tumour (incidentally, the same glioblastoma that killed my friend Sandra). Knowing this, I was wary of approaching Between A Wolf and A Dog, but I needn't have worried.

I wasn't familiar with the expression 'between a wolf and a dog' (it's French) but it refers to the hour of twilight when apparently it's difficult to distinguish between those two animals. The whole novel is like this: strong but delicately poised, at once tender and steely. It takes place over a single rainy Sydney day, following Hilary as she contemplates her illness and the decision she's taken; her daughters April, a singer, and Ester, a therapist, estranged over the infidelity of April and Ester's pollster husband Lawrence. The narrative dips back to happier and also more fraught times, and Ester's patients introduce vignettes of lost love, loneliness and pain.

This was the kind of novel I aspired to achieve when I first began writing -- acute psychological insight married to beautiful, sparse, lyrical prose. I never quite got there, and discovered my strengths lay elsewhere (to put it kindly). What a terrible loss is Georgia Blain, but how fortunate we are that she was with us long enough to produce superb work like this.