The Woman Who Cracked the Anxiety Code 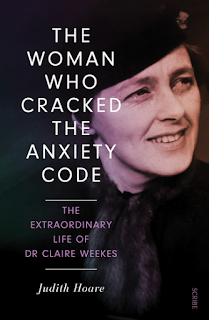 The Woman Who Cracked the Anxiety Code was Dr Claire Weekes, an Australian doctor who wrote self-help books about anxiety and panic attacks which sold millions of copies all over the world, and still sell well today. Yet I had never heard of her!

Judith Hoare's biography is sub-titled The Extraordinary Life of Dr Claire Weekes and in many ways Weekes' life was indeed extraordinary. She was a scientific researcher in the 1920s, when women were barely admitted to university, and her pioneering work on lizard reproduction is still cited today. She reinvented herself several times, planning a musical career, then an upmarket travel agency. The latter plan being kiboshed by the outbreak of WWII, she went back to university and qualified as a GP. Then, in the 1960s and beyond, came the self-help books.

This is where her story, sadly, becomes less extraordinary. Being a woman, and a mere general practitioner rather than a psychiatrist, writing for a popular audience (so she could actually help as many people as possible) rather than in academic journals or psychiatric forums, her work was belittled and overlooked. And yet her mantra (based on both scientific knowledge and personal experience) -- Face, Accept, Float, Let Time Pass -- presaged modern approaches to dealing with anxiety like CBT and ACT. Her key insight was not to fight the feelings of panic, but to let them wash through you, and to "float" through them.

I would have liked a little more on her work, which was sometimes presented in a slightly confusing way by Hoare, but overall this was a fascinating introduction to a woman who should be more widely known. Borrowed from my friend Christine.