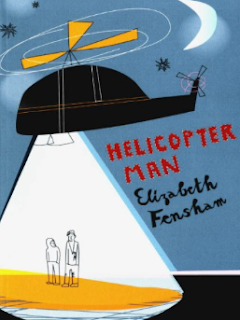 Elizabeth Fensham's debut novel Helicopter Man won the CBCA Book of the Year for Younger Readers in 2006. Like The Wych Elm, it revolves around perceptions of reality and memory.

Pete and his dad are on the run. Pete's diary offers us an entertaining account of their difficulties hiding out in an old shed, but very quickly the reader is aware that something is deeply wrong. It's not until quite late in the book that Pete grasps that his father is actually mentally ill, and that the danger  he fears from helicopters and pursuers exists only in his mind.

This is a poignant little book. Luckily Pete connects with old friends and makes new ones, and his father finds the help he needs. It's not an unalloyed happy ending, but there is definitely hope on the horizon. Though this novel is only fifteen years old, I have a nasty suspicion that there might be less support out there for the Pete's dads of this world than there used to be. Helicopter Man would be a great resource for kids with mental illness in the family, and it's a good story in its own right. Set in Melbourne, which is a bonus.

Disclaimer: I purchased this book after having lunch with Elizabeth, who is a lovely person. Totally didn't influence my opinion, though!
Posted by A latte beckons at 12:14 PM