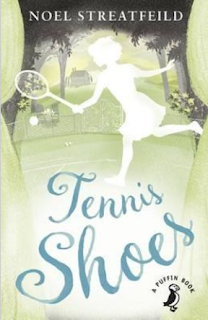 There is supposed to be a bit of a curse on books with green covers. Certainly I would say that Human Croquet, which I read recently, was not one of Kate Atkinson's best. And the same can be said for Tennis Shoes, which was that rare beast, a Noel Streatfeild title I hadn't read before.

I don't think I ever came across this book as a child. Even if I had, I wouldn't have picked it up as I had zero interest in tennis. Unfortunately this seems to have also been the case for Streatfeild herself, who was apparently looking for a follow-up to the hugely successful Ballet Shoes and decided (or perhaps the publisher decided) that tennis would fit the bill. After spending months dutifully researching for this book of a family of tennis stars, Streatfeild reportedly said, 'I know one thing for sure, I simply hate tennis.' (According to the note at the back of this edition, she later changed her mind and Tennis Shoes 'became one of her favourite books.' Yeah, right.)

Again we have the weird Nanny-figure/governess in Pinny (and the children's mother, a doctor's wife, seems to do nothing all day). Again we have conscientious older children, twins Jim and Susan, who work hard at their tennis but lack what we would now call X factor. Youngest brother David loves his dog, Agag, and long words. And we have 'difficult' middle child Nicky (did you know that Noel Streatfeild was a middle child??) who unexpectedly becomes the real star of the family.

This is a competent, amusing tale from Streatfeild, but her lack of connection to sport is clear. Part of the enduring charm of her books is the intimate detail and the acute understanding of how it feels to be part of a theatre production or to struggle with ballet steps. Tennis Shoes goes through the motions but I never felt I got inside the tennis experience. I think the only other 'sporty' book Streatfeild wrote was White Boots, about ice skating, which is much closer to dance than tennis will ever be!
Posted by A latte beckons at 10:57 AM