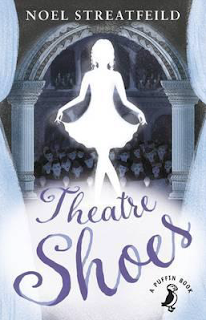 I remember being pleased but slightly bemused when Ballet Shoes scored a shout-out during the 1998  Meg Ryan-Tom Hanks rom-com, You've Got Mail. Ryan, a bookshop owner, recommended Ballet Shoes to a customer, but mentioned that there was a whole series of other 'Shoes' book as well. Er, what?

It wasn't till much later that I realised that a number of Streatfeild books had been re-titled to create a 'series' where none had originally been intended. Thus Curtain Up! became Theatre Shoes, White Boots became Skating Shoes, The Circus Is Coming became Circus Shoes etc. The Painted Garden became, ridiculously, Movie Shoes. (Tennis Shoes was always Tennis Shoes.) Blerch. What even are Movie Shoes, or Theatre Shoes, supposed to be, anyway? (Though I have to admit that if you google 'theatre shoes', the internet summons... shoes.)

So, I have read Theatre Shoes before, but under its old moniker of Curtain Up! I didn't remember much about it, except for the name Sorrel, which I think is gorgeous. It's war-time and the three Forbes children, unknowingly part of a famous theatrical family, are sent to Madame Fidolia's famous stage school where the Fossil sisters had gone before them. There's another tiny cameo for the Fossils, who are all overseas or flying planes, but provide scholarships for the Forbes siblings. Sorrel discovers that she wants to be an actress, Mark really wants to be a sailor but can endure acting and singing if he's allowed to 'pretend' himself into a role, and the youngest Holly turns out to be a gifted comic.

In this book, it's the details of wartime privation that are the most striking -- the shops are all empty, Grandmother's grand furniture has been sold to make ends meet, the children long for smart attache cases and lovely clothes, but have to make do with 'utility frocks.' (I had never heard of these, but came across them again in Domestic Soldiers, of which more presently.) The extended family are beautifully sketched -- Grandmother, the egotistical matriarch, kind uncles and aunts, and Uncle Francis who is a bombastic Shakespearean Ac-Tor, as well as the children's cousins, supremely self-confident Miranda and funny Miriam. Annoyingly, there is one rather racist scene where a wounded Chinese sailor speaks pidgin English to Sorrel.

The obligatory Grand-Nanny role in this book is filled by Hannah, who had been housekeeper to the children's late grandfather, but is assumed by everyone (including herself) to inherit, without question, the job of looking after the children. This means moving to London and living in a very run-down house, sharing a bedroom with Holly and (horrors) riding escalators. I couldn't help wondering if poor Hannah might have had somewhere else she would rather have been.
Posted by A latte beckons at 3:57 PM