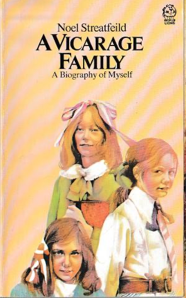 I haven't read Noel Streatfeild's A Vicarage Family for years, but it used to be one of my very favourite books. I must have read it twenty times, and as I read it again, whole passages leapt into the light, breaking the surface of my memory.

I'm not sure now why I was so attracted to this book. It's described as A Biography of Myself, and it's a lightly fictionalised memoir of Streatfeild's own childhood, with herself as the 'difficult' middle child Vicky Strangeway. But though Vicky is awkward, stubborn, sulky and misunderstood, her relationship with her sisters, particularly artistic older sister Isobel, is strong and supportive. She is also close to her worldly cousin John.

But Vicky's relationship wth her mother is clearly troubled; hence all those distant, inept mothers in her fiction. It's hard to think of a single sympathetic mother figure in a Streatfeild book (maybe Cathy Bell in The Bell Family); the maternal role is always filled by a Nanny figure who comes from outside the family. It's intriguing to see the prototypes of these extra family members in their original incarnation -- wiry, sharp-tongued Annie, wise Grand-Nanny, and efficient Miss Herbert.

In all honesty, there is not a lot of action in the story. Life in the Vicarage is pretty uneventful. But it must have been the detailed texture of everyday life which is captured so vividly, and the intense emotional experiences of Vicky herself, which I found so compelling. It really felt like entering into someone else's true life, albeit the life of an English Edwardian teenager when I was a little Australian girl growing up in PNG. Perhaps it felt exotic!

Some elements that have stayed with me: the strict moral rules of their gentle father, forbidding the girls to eat anything but bread and butter at a birthday party in Lent; the formidable Miss French who won't tolerate a raised voice even when Vicky sprains her ankle; favoured younger sister Louise clutching her golliwog and dramatically fainting, when it's Vicky who is actually much more ill (injustice!); and the last chapter of the book, which is the most moving introduction to the tragedy of WWI I could have encountered.

I only recently became aware that there are further autobiographical volumes, Away from the Vicarage and Beyond the Vicarage, but I've never managed to get hold of them. They cost about a gazillion dollars to buy secondhand, so maybe I never will.
Posted by A latte beckons at 10:26 AM