A Parcel of Patterns 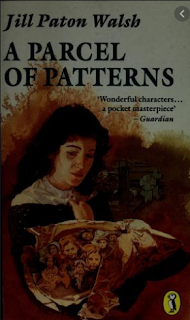 It's so strange, the threads of connection that run between books and between books and life. I didn't know that A Parcel of Patterns is about the plague: fear and contagion, ignorance and suffering before a mysterious sickness. I didn't expect to read the same Biblical quotation that featured in The Serpentine Cave: He that shall lose his life shall save it. (Same author, though, so maybe not that surprising.) EDITED TO ADD: I forgot, there was also a mention of herb-of-grace ('herbygrass') in this book, too.

Jill Paton Walsh's novel (apparently a YA novel, but though the narrator Mall is young, this book doesn't seem to be especially pitched at young adults to me, let alone children!) covers the same story as Geraldine Brooks' Year of Wonders, but in a more straightforward way (and with far fewer pages!) Dare I say, I prefer Jill PatonWalsh's version? (And I wonder if Brooks ever read it.) This is a short but very moving book, which of course carries extra resonance at the moment, mired as we are in the midst of a global plague of our own.

Mall's home, Eyam, is a real place, and the story she tells is true. In 1665, plague was brought to this isolated rural village in an infested packet of clothing patterns (hence the title) and struck down so many its inhabitants that the villagers decided to cut themselves off from the rest of the world. Perhaps as many has eighty percent of Eyam's people died before the pestilence passed. The horror of the sickness is intensified because the villagers have no idea what causes it, or how to protect themselves -- they light fires, sweeten the air, try charms and prayers. Some live and most die, but can you blame them for seeing God's judgement in the random outcomes? There is no gore here, but the sudden illness and deaths are all the more powerful for being simply recounted. Jill Paton Walsh's ability to tell her story in 17th century style prose is masterful.

But it's worth remembering that even with all our modern scientific knowledge and understanding, plague and viruses still have the power to strike terror and anguish over us all.