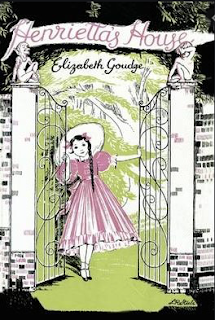 I adored Elizabeth Goudge's books as a child -- The Little White Horse and Linnets and Valerians were two of my especial favourites, but I also had Smoky House (due for a re-read actually) and enjoyed The Valley of Song. I don't think I have ever read Henrietta's House before, though I was familiar with the characters from the Torminster books, like The City of Bells, which were written for adults, though I read them as a child too. Girls Gone By, who have published this reprint, thoughtfully supplied a précis of The City of Bells to bring forgetful readers up to speed.

As usual with Goudge, there is not a huge amount of plot in this book. Most of the action takes place over the day of Henrietta's adopted brother Hugh Anthony's birthday picnic (Hugh Anthony is another variant of the strong-willed red-haired child who so often appears in Goudge's fiction -- surely based on a real person??) Various parties wind their way up into the magical hills, become lost, encounter strangers and eventually end up safe and happy in Henrietta's dream house which has been kitted out by her father.

I can imagine as a child, I would have been utterly enchanted at the idea of a house of my own, furnished to my exact specifications -- in fact I remember I used to spend many happy hours picking out furniture and drawing floorplans of my ideal house, so I really would have loved this story. It has a deliberate fairy tale flavour, a book to escape into and be comforted. Henrietta's House is not a challenging read, but it is a warm and happy one.