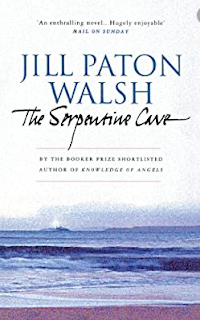 Thwarted in my efforts to find Jill Paton Walsh's books for younger readers, A Parcel of Patterns and Goldengrove, I settled on this 1990s adult novel, The Serpentine Cave, instead. It's another story of mothers and daughters, and the conflicts between art, love and motherhood. As the book opens, Marian's mother Stella is dying; Marian and her own adult children, Toby and Alice, must deal with what Stella has left behind -- a muddled legacy of debts and secrets and lots of (mostly unsuccessful) paintings. Most pressing of all is the secret of Marian's father -- who was he, and is he connected to a traumatic childhood memory?

A few clues lead Marian to the Cornish town of St Ives, which was a fishing town and an artists' colony. It also happens to be the place where my cousin and her family live! It has amazing light, Caribbean-looking beaches and surf, and I believe it's still a hub for artists and musicians. Would you believe this is the UK? 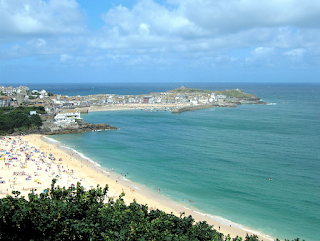 I had a lovely time googling images to match the setting of the novel. Though it's primarily a fictional story, The Serpentine Cave also contains true events, centring around a lifeboat tragedy in 1939 that killed twenty-one men and devastated the community -- not just those who lost husbands, sons, fathers and breadwinners, but men who declined to take their spot in the boat and were thus saved, and had to carry the burden of survivor guilt thereafter. I'm not sure whether including real people, speaking in their own words, in the novel distorts or enhances the integrity of the story. However, as with all Jill Paton Walsh's books that I've read so far, The Serpentine Cave is beautifully written, and insightful on the costs and joys of creativity and love.

(Serpentine refers not the shape of the cave (or the shape of memory) but to a greenish kind of local stone. So there you go.)