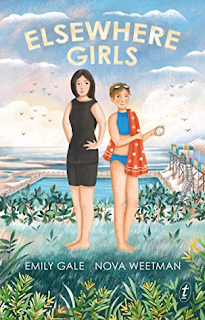 An Australian middle grade, body-swap, time slip novel -- could there be a book more solidly up my alley? Penned by two of our most accomplished authors in Nova Weetman and Emily Gale, and written in alternate voices, Elsewhere Girls centres on 21st century Cat and early 1900s Fan, who have mysteriously swapped times and bodies while swimming in Sydney's Wylie's Baths. 'Fan' happens to be Fanny Durack, destined to become Australia's first female Olympic gold medallist in swimming, and a fierce fighter for the rights of women to compete on a par with men. Cat is also a swimmer, but a little less committed than Fan.

There is a lot of fun to be had with the girls' bafflement with the times where they've landed, adjusting to their new families, new expectations, strange technology (or lack thereof), weird clothes and all the rest. But there is a deeper level to Elsewhere Girls as both girls gain a fresh perspective on their own circumstances and each decides what she really wants.

This book must have been so much fun to write. It's probably the first time I've encountered a book set (partly) during the pandemic, though there is only one fleeting reference to 'the virus'. It must have been difficult to decide how much to acknowledge recent history and it's hard to believe that Fan could have escaped hearing about Covid altogether. Luckily Fan never masters the internet enough, or is too modest, to think of googling herself! Likewise, Cat decides not to tell her new family about the approaching war, so both girls remain in a domestic bubble largely untouched by world history (I can absolutely understand the authors' decision to take this approach -- letting in global concerns would have made this a very different kind of book).

Elsewhere Girls is a super, always engaging, thoughtful, funny and sweet novel, and I loved it.