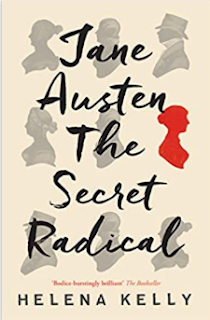 Let me start with a gripe -- the official title of this book is Jane Austen, the Secret Radical. But the comma is nowhere to be seen, either on the front cover or the spine, nor even on the frontispiece, which replicates the front cover. I DON'T LIKE IT.

I did, however, very much enjoy the book itself. Academic Helen Kelly launches into a brisk, confident set of arguments which I didn't always agree with, but certainly provided much food for thought. She contends that far from being an author of genteel, well-mannered romantic comedies, Austen was a sharp, astute and sometimes controversial writer about important social and political issues. According to Kelly, the delay between the novels' composition and their eventual publication means that much of their pointed contemporary references were lost -- and two hundred years later, we modern readers definitely don't understand the context and clues that her first readers might have picked up.

Kelly convincingly argues that Mansfield Park is indeed all about slavery (despite some readers claiming that Austen totally ignored the issue) and particularly the hypocrisy of the church in owning slaves overseas; that Pride and Prejudice is quietly radical in its rejection of automatic class superiority; that Sense and Sensibility takes a hard look at money; while Emma carries a barely concealed subtext about the land enclosures of the time and the very real consequences for the poor (Kelly argues that this makes Mr Knightley a disturbing villain rather than a hero).

I don't know enough about Austen scholarship to judge all of Kelly's claims, and sometimes she does seem to draw very big conclusions from rather flimsy evidence, but it has certainly made me consider Austen's novels with a fresh eye.

PS I had just started reading this book when I realised that the TV that happened to be on in the background was showing a documentary about Winchester Cathedral -- Jane's burial place. Serendipity!