The Family at Misrule 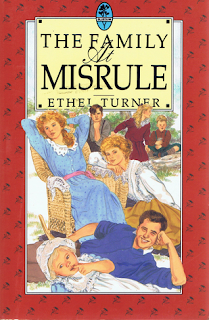 I didn't realise until recently that there were sequels to Seven Little Australians. My grandparents sent me a TV tie-in copy to PNG in the 1970s which I still have (very tattered now, see below) and the death of Judy made a huge impression on me -- it's one of the most moving scenes in Australian literature. I never saw the TV series but I wonder how they handled it.

So The Family at Misrule was completely new to me. At first I was a little confused, as the action picks up five years after the end of the first book, and all the youngest members of the household are now known by different names! The General has become Peter, Baby is now called Poppet and there is a new baby called Essie (bringing the total rather heartlessly back to seven). Again each member of the tribe gets into some scrape or other, some of them pretty serious -- someone runs away and is effectively missing for months, someone else narrowly avoids an unsuitable marriage. It's usually loving, sensible Meg to the rescue.

I was a little taken aback by one quite snobbish episode where impressionable Nell is steered away from a nouveau-riche, vulgar set of new neighbours -- it was quite jarring to read (on top of the almost-unsuitable marriage with a different neighbour!) how improper the association was considered to be, on not massively persuasive grounds... Honestly I couldn't see why Nell couldn't play tennis with them occasionally and it might have averted the later disaster.

Because of course there is a later disaster, involving a contagious disease. It was quite harrowing to read this part of the book -- the anxious checking each member of the family for symptoms, Pip scrubbing himself in the river in an attempt to cleanse himself of germs, the hit and miss ordeal of waiting to see who will 'pull through' or when the fever will 'break.' Vaccination, people! Remember how bloody lucky we are that we don't have to routinely go through this torment and the loss of children.

And I did miss Judy, who was always the most appealing member of the bunch. 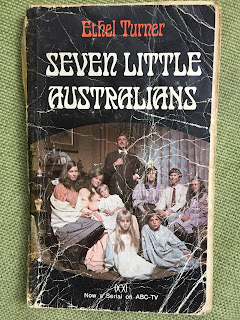