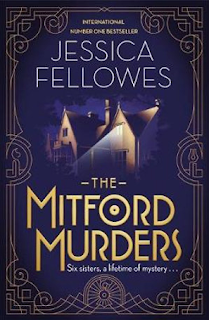 Of course I couldn't resist buying Jessica Fellowes' The Mitford Murders. I love me a between-the-wars murder mystery, and the addition of the Mitford family was an extra layer of jam on top. Fellowes is the niece of Julian Fellowes, of Downton Abbey fame, and she has also written the book companions to the series, so I felt she would be familiar with the period and probably benefit from her uncle's researches. Also, I found the midnight-and-gold cover of this edition very appealing. So I plunged in with high hopes.

I don't feel too bad saying this as The Mitford Murders is set to include six volumes (one for each sister, five down, one to go) and there are murmurs of a TV series, but I finished the novel feeling rather more ambivalent than when I began. It took me a long time to finish (the chapters are very short and I was interspersing with other books), and on the whole I enjoyed the experience. There was one of those serendipitous cross-over moments when I was also reading So You've Been Publicly Shamed and Max Mosley popped up (son of Diana Mitford), and there was another reference to the artists' colony at St Ives (how did I survive so long without knowing about it?)

The central protagonist of The Mitford Murders is the fictional Louisa Cannon, who comes to work as a nurserymaid for the Mitfords and becomes chummy with eldest daughter Nancy. Louisa and her admirer Guy begin investigating the death of a former nurse on a train -- based on a real unsolved murder case. But the Mitford family are of course real people, and so was Florence Shore, the murder victim. In the end I felt quite queasy about this uncomfortable blend of history and fiction, especially when the murder case is 'solved.' I spotted the central twist a long way ahead, and there were a couple of niggles with the writing that bothered me ('face like a punctured beach ball' leapt out at me, in a novel set in 1920, when beach balls weren't invented till 1938 -- yes, I did look it up, but it just felt wrong when I read it and it pulled me out of the story.)

So while I wish Jessica Fellowes well, and good on her for obviously striking a chord with lots of readers (and publishers!), I don't think I will be checking out any more Mitford Murders. Maisie Dobbs covers much of the same ground and perhaps with more integrity.