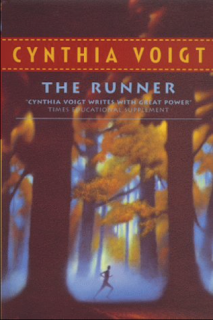 With the fourth book of the Tillerman series, Cynthia Voigt moves us back one generation in time, to see the family that Dicey's mother came from, the family that dwindled until only Abigail, the children's grandmother, was left. The focus of The Runner is the children's uncle, Samuel, called Bullet, who is another of Voigt's self-contained, self-reliant characters. Bullet has walled himself off from everyone to protect himself from his father's anger and tyranny over the household -- what we'd now call coercive control. When his father orders him to cut his hair, Bullet responds by shaving it all off; his coldly furious father then decrees that he doesn't want to look at him until it grows. But Bullet is just as stubborn, and keeps his head shaved, despite having to cook and eat alone, and leave the room if his father enters it.

Bullet is a hard character to warm to, especially as he expresses some racist attitudes early in the novel. But he is superbly drawn and the reader can see exactly how he has ended up the way he has -- withholding connection from everyone, except to some degree his mother, and also his fisherman boss, Patrice, who has a painful history of his own. It's not until Bullet starts to think about other people, particularly Tamer Shipp, a Black fellow runner, that I really began to feel sympathy for him.

The descriptions of cross country running are fantastic -- I've never been a runner, I loathe running, even for the tram, but this novel made me appreciate the appeal. This is a sad book in so many ways. We already know from the earlier novels in the series that Bullet is doomed, but that knowledge doesn't make the ending any easier to read. This isn't my favourite Tillerman book, and it's probably the one I struggled with the most; I found it Jeff Greene far more sympathetic. But it does flesh out the back story of the troubled Tillerman clan, and for that alone, it's worth reading.