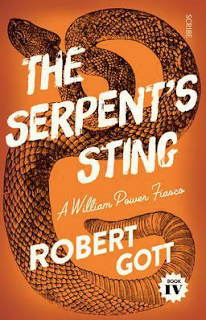 The problem with reading books in a series like Robert Gott's William Power Fiascos out of order is that you leave yourself wide open to spoilers. The Serpent's Sting, being the fourth and final chapter of Will's adventures, unfortunately provided many hints of what happens in Book 3 (Amongst the Dead). I'll probably still read books 1 and 3 in the series at some point, because they are very entertaining.

The Serpent's Sting opens with Will back in Melbourne, for once enjoying some theatrical success, albeit playing a pantomime dame rather than the Shakespearean heroes he'd prefer. But Will is nothing if not pragmatic and he's willing to accept any notoriety rather than none. He's still entangled in military intelligence, knee deep in bodies, drug dealers, cross-dressers and mystery, this time with family complications thrown in for good measure.

Will is really an unpleasant human being: he's selfish, blinkered, and cynical. But for a brief adventure, he is remarkably good company.