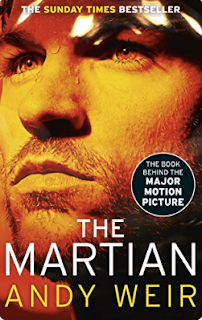 Andy Weir's The Martian is not a book that I would have picked up ordinarily, but it was strongly recommended by the younger daughter, who requested it a while ago and then lent it to me. And then after I'd finished it, we watched the movie.

The Martian oddly reminded me of Arthur Ransome's Swallows and Amazons books, which I adored as a child. There was a similar emphasis on describing practical problem-solving (which is what appealed to the YD), except that instead of pitching tents or catching fish, stranded astronaut Mark Watney has to figure out how to create water, grow food and communicate with Earth. There is a LOT of science, all of which is apparently accurate, especially in the early pages, but there is also a lot of drama. It reminds me of those writing exercises that demand you throw increasingly horrendous problems at your protagonist: just when you think Watney's going to be okay, he blows up some vital piece of equipment, or crashes his rover, or breaks his spacesuit.

The scenes on Mars are intercut with chapters set on Earth, as NASA discovers that Watney is still alive and then develops a rescue plan. The film version lost some of the detail of the problems Watney had to solve, but made up for it with the spectacular visuals of the surface of Mars (the movie was partly shot in Jordan) and gorgeous scenes on a very luxurious space station. As YD remarked, if she'd seen this when she was younger, it would definitely have made her want to be an astronaut.

I think there is a part of all of us that secretly wants to be an astronaut; however, reading The Martian convinced me that I wouldn't last a day!