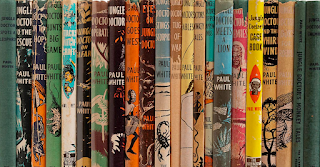 This is how I remember the shelf of Jungle Doctor books in the Mt Hagen library: low down, to the right of the window, almost at the end of the alphabet. They were written by Paul White, an Australian doctor and missionary who managed to spin his two years in Africa into dozens of books, all with an evangelical message.

I read loads of these as a child, though I didn't remember much about them, and the spines jumped off the shelf at me when I came across them in City Basement Books a few weeks ago. For the sake of my childhood, I selected just one, Jungle Doctor Attacks Witchcraft, and expected it to be hideously racist. It was certainly patronising, but it wasn't too bad on the racism scale. What I'd totally forgotten was the heavy-handed Christian messaging -- every case who crosses Jungle Doctor's path (he is ever named, except as 'Bwana') can be turned into a parable, usually delivered not by Bwana himself, but by his African sidekick Daudi (who seems to do a lot of the leg work around the mission station).

"H-e-e-e-e," said Daudi, "you may pull out the plant, but you cannot get rid of the results of it. Behold, indeed, this plant is like sin. You may do your best to destroy it, but you cannot get away from its effects. The Bible says truly: 'The soul that sinneth it shall die.'"

The books are short, just over a hundred pages, and generously illustrated (the illustrations are pretty racist, so I won't reproduce one here). I guess as a child I could see a few parallels between Jungle Doctor's life in Tanganika Territory (now Tanzania) and our lives in Papua New Guinea; and the evangelical content was similar to what I was imbibing every day from our neighbours, my friends at school and their missionary parents. Another trip down memory lane, but this time it's not one I'm eager to repeat.