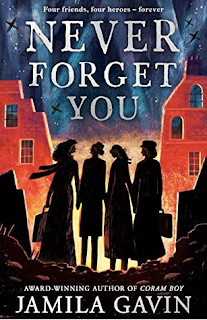 I ordered Never Forget You as a birthday present for myself after reading a review in The Guardian and thinking, ooh, this sounds just up my alley. To my shame, I've never read any of Jamila Gavin's books before and had never even heard of her until my mate Kirsty Murray told me all about her at book group.

Never Forget You is yet another WWII story (I seem to be on a bit of a binge at the moment!), but this novel focuses on four women, school friends who end up following very different paths through the war -- from working in the French Resistance in Paris, to flying planes, to infiltrating fascist groups within England itself. One of the characters is a real person, Noor Inayat Khan, though Gavin fictionalises aspects of her life. Inspired by reading this novel, I went on to watch the movie A Call to Spy on Netflix, which also features Noor's experiences (warning: it's pretty sad).

Unlike The Castle on the Hill, Never Forget You doesn't pull its punches -- not all the friends make it safely through the war. With her links to India, Gavin was obviously drawn tothe figure of Noor, and describes this novel as a 'tribute' to her. I must admit I did struggle a little with Noor's encounters with the fairies, which sat rather oddly in an otherwise bitterly realist story, though it does chime with her parallel career as a children's writer. But overall Never Forget You is absorbing and moving, and it definitely sent me down a rabbit hole of spies and resistance fighters.