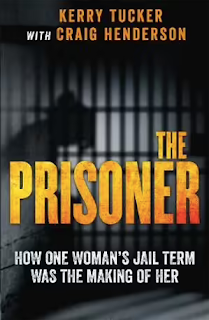 Jane Caro cited Kerry Tucker's memoir, The Prisoner, as a helpful source when she was researching her novel, The Mother, which I also read recently. The Prisoner was an absolutely fascinating and enlightening glimpse into a world which I know very little about. Kerry Tucker was an ordinary suburban mum (albeit with a painful personal history of sexual abuse) who fell into an ever-deeper spiral of debt and fraud, until she was finally convicted and received a fourteen year sentence, longer than some women who were convicted of murder (she was out a lot earlier on parole).

Yet again in my recenr reading, there were women in Kerry's prison who had killed abusive partners. She mixed with women from Melbourne's gangster underground, drug addicts, tough women and vulnerable women, women with intellectual disabilities (who shouldn't have been in prison at all), women with mental illness. There were kind prison officers and brutal prison officers. Kerry's descriptions of her experience are straightforward and unflinching; prison is no luxury resort, and the greatest punishment is separation from loved ones. Kerry finds being parted from her two young daughters especially painful.

And yet her account of her own years in prison is definitely positive. For the first time in her life she finds a clear purpose and place to belong, writing parole letters for her fellow inmates and eventually working as a peer support officer -- a counsellor, liaison with authority, problem solver, trouble shooter, go-between, legal and life adviser. As a middle class and articulate woman, she could offer gifts of practical common sense and language, and for once in her life, found herself indispensable. She should have been moved to a low security facility, but she was so useful that she was kept where she was.

The Prisoner does not gloss over the pain and trauma of incarceration, but Tucker maintains that 'prison works.' Maybe, if you have someone like her by your side... I'm not so sure. Still, I learned a lot from this book.