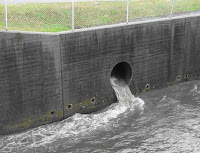 I'm not sure why, but our household hasn't had any problem meeting the 155 litres per person per day target set by the state government. Our total comes in closer to 50 litres each than 150. It's not that we do anything amazing or bathe in our own urine or anything -- Michael and the girls have baths, not showers, which should drink up heaps of our allowance. We do use last night's bath water to flush the toilet in the morning, which must help, and we don't flush unless we have to, so that must help too. We don't water the garden except with laundry grey water or from the tank, but we hardly use the tank water either.

But I did get one clue yesterday when I did a load of washing. Because there were some vomity clothes in there (you don't want to know), I decided to use the 60 degree cycle instead of the rapid setting I normally use. Well! Instead of taking half an hour, the machine was churning away for about two hours (maybe longer, I lost track), and instead of spewing out one and half rubbish bins full of grey water, I reckon about four and a half bins worth came out! I was bucketing all afternoon.

So maybe, entirely unintentionally, we've been saving water on washing. I made a pact with myself not to do washing two days in a row, perhaps that's helped too, but I was just appalled at the amount of water that came out of that machine. It's a front loader, too, aren't they supposed to be more efficient?? I dread to think what a normal top loader must be using.

Next step -- washing clothes in the bathwater! No, wait -- showering with our clothes on!
Posted by A latte beckons at 11:50 AM