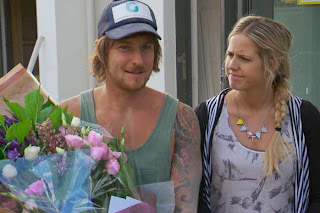 Generally speaking, I find the lure of reality television relatively easy to resist. All those singing and dancing and cooking shows leave me frankly cold. I do have a soft spot for Wife Swap, but that's about it.

However I must confess I have been sucked in big time by The Block. And it's not just me; every night at seven o'Block (as Channel 9 jocularly calls it) our whole family clusters eagerly around the television for the next installment.

It all becomes much easier once you've picked a favourite couple to barrack for. We are definitely Team Dale and Sophie, won over by Sophie's quirky, creative flair and Dale's Oz-as, dry as toast wit. (Our favouritism was cemented when we learned that they had the excellent taste and good sense to purchase one of our dear friend Sandra Eterovic's pieces; it hasn't been on the show yet, but we won't miss it when it appears!) We love the way Dale matter-of-factly arranges flowers, and the way Sophie is resolutely hopeless with the power tools. We loved the suitcase drawers, the home-made glass jar chandelier, the way they aren't afraid to use wood instead of stainless steel.

We are also fond of nice guys Brad and Lara, and we shake our heads at the OTT follies of brothers Mike and Andrew (mirrored walls in the toilet? seriously?), and have watched with bemusement but no surprise as careful editing has transformed "Melbournites" Dan and Dani into super-competitive super-villains. (Why are Dan and Dani "Melbournites" -- described thusly no less than five times last night -- while Dale and Sophie, also from Melbourne, are apparently not? Is it because to the Sydney-based production staff, "Melbournite" is a term of abuse? Just wondering...)

There are only two weeks to go, Sandra's clock is still to come, and what on earth are we going to do at seven o'clock when it's all over??
Posted by A latte beckons at 12:52 PM