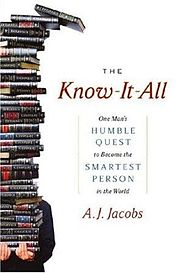 This was an impulse buy from the library book sale, but I was unexpectedly beguiled by it. AJ Jacobs, once convinced he was the smartest boy in the world, and horrified by the slow leaking of knowledge (and intelligence?) from his once-agile mind, resolves to regain his mental ascendancy by reading the entire Encyclopaedia Britannica from A to Z.

This is the true story of his quest, liberally punctuated with bizarre and fascinating snippets of information gleaned from each volume. It's also a personal memoir of the year or so he spent cramming all that knowledge into his depleted brain - his attempts to outdo his (extremely smart and somewhat competitive) father and brother-in-law; his and his wife's simultaneous quest to get pregnant; his appearance on Who Wants To Be a Millionaire?

The thing is, I can totally relate to the idea of reading the encyclopaedia from beginning to end, though admittedly it's the kind of project I would have embarked on when I was thirteen rather than thirty five. I love QI (have I mentioned that?) and some of my happiest moments have been spent (modestly) beating others at Trivial Pursuit or whipping out some obscure factoid to take the lead at a quiz night.

On the slightly disturbing side, I found that I actually already knew at least half -- maybe even three quarters -- of the obscure trivia with which Jacobs liberally besprinkles his tale. Is it possible to watch too much QI? Horrors.

Another rather sad footnote: it's no longer possible to emulate AJ Jacobs' feat (not with a current edition, anyway). A few years after this book was written, Encyclopaedia Britannica stopped producing hard copy volumes and is now available in on-line form only. It's just not the same.