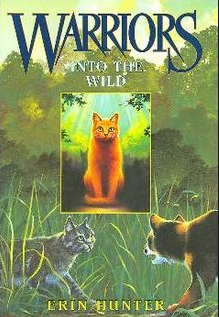 Evie has been obsessed with the Warriors series for years now, but this is the first time I've actually sat down and read one from beginning to end, despite having about ninety of the bloody things clogging up the Kindle. And I have to say I was pretty impressed!

The premise is that there are groups of wild cats, each hunting in their own territory and largely hidden from the Twolegs. Thunder Clan lives in the forest, River Clan by the river, Wind Clan on the moor, and so on. In this introductory novel, Into the Wild, Rusty the pet kitten (a despised "kittypet") runs away to join Thunder Clan, becoming Firepaw the apprentice, and having proved his worth through various trials and battles, graduates to become Fireheart the warrior.

The world building in this series is tremendous -- I can well understand why kids become absorbed in this universe. The clans are organised into warriors who hunt and defend territory, queens who rear the kittens, youthful apprentices, kits and elders. Each clan also has a medicine cat who learns the secrets of herbs and healing. The cats have a well developed history and mythology, even a form of spirituality: dead cats pass into Star Clan, and can communicate with the living leaders. (Evie tells me she doesn't believe in heaven, but she does believe in Star Clan.) And the stories span whole generations and cross from clan to clan.

There is a whole parallel world of fan fiction, art and animation revolving around Warriors, and I can see why. These cats inhabit a world between children and adults, living secretly in the woods but facing real perils and difficult adventures. Birth and death, injury and betrayal, friendship and fear are all part of their lives. I've never been a huge fan of animal stories, but this series has a depth and solidity that makes it work.