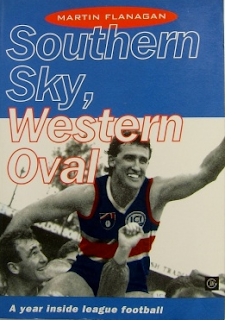 Southern Sky, Western Oval by Martin Flanagan, is the story of one season in the life of the Footscray Football Club, as it was still known in 1993. (The Western Oval has changed its name, too, to the Whitten Oval.)

I took this cover image from Fishpond, so I suspect it's the actual copy I bought! Bornadog, from WOOF, tracked it down for me after I said I'd been hunting for it for a while. The Whitten Oval Online Forum is a wonderful community. When the Bulldogs made it into the Grand Final last year, 60 years after their last appearance, WOOF's motto was 'no Bulldog left behind.' Somehow, everyone looking for a ticket was helped to find one, thanks also to the generosity of other football fans who had tickets but gave them up so that the maximum number of Bulldog fans could experience the day.

Anyway, the 1993 season, though it began with high hopes, did not have the happy ending of 2016. Nonetheless, it's a wonderful read, even though I was unfamiliar with many of the characters and the world of AFL has changed enormously in the last twenty five years. One of the players in the 1993 side was a young Luke Beveridge, who coached last year's team to the ultimate victory.

It struck me that Beveridge's coaching style might have been influenced by his coach at the Bulldogs at this time, Terry Wheeler. Wheeler was a coach ahead of his time. In an era when most coaches were stern, shouty disciplinarians, Wheeler aimed to create an environment where each player could produce his best. He would quote Jonathan Livingston Seagull, took his team sky-diving, played bag-pipes before a match. The club president has said that if he'd had his time over, he wouldn't have sacked Terry Wheeler. But Wheeler is still a close friend of the club, and rejoiced in last year's victory with the rest of us.

Martin Flanagan writes about football like no one else. He understands the romance, the anguish, the bonds that knit a club together. And he has a poetic eye. He describes one player on the field as looking like "a bread van surrounded by sports cars." Another player's shoulder muscles "bulged like plates in a suit of armour." In my opinion, he is as fine a writer as his brother Richard, whose novel Wanting I read at the same time as Southern Sky, Western Oval. But because he writes about sport, he is under-rated by literary critics.

Martin Flanagan has been asked to write a book about the 2016 Western Bulldogs premiership. I can't wait.