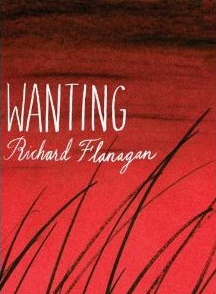 A proper, grown-up literary novel -- the first one I've tackled for ages. I just haven't been in the right mood to face the challenge of having to think, or read more slowly, or piece things together for myself -- hard work, in other words! I have a few literary novels on my shelf which I'm waiting for the right moment to open. But as time goes on, I'm beginning to wonder if that moment will ever arrive. (The Goldfinch, The Lacuna, I'm looking at you -- and you are so long.)

But as literary novels go, Richard Flanagan's Wanting was a good place to start -- it's pretty short, and its premise sounded promising. It loosely interweaves three true-life stories: that of Charles Dickens, who is facing a crossroads in his life and marriage when he meets the young actress Ellen Ternan; Lady Jane Franklin, who we see in two stages of her life, the wife of the Governor of Van Dieman's land (now Tasmania), and as the grieving widow of the same husband, lost on a polar expedition; and lastly (and to me, most interestingly) the story of the young Aboriginal girl Mathinna, who was adopted by the Franklins during their time in Tasmania, and then abandoned by them.

Flanagan said that this novel is about love and yearning, not really about history, and I gather he has made his own use of the facts to suit his narrative. The writing is beautiful and the links between the three main characters are certainly intriguing. But in the end I found that the tragedy of Mathinna held my attention much more firmly than Lady Jane's lamentations or Dickens' mid-life crisis.

Richard Flanagan's subsequent novel, The Narrow Road to the Deep North has won multiple awards and accolades, but I've decided that it will be too harrowing for me to handle at the moment. Is it wrong that I am consciously looking for diversion and enjoyment in my reading? I hope this is only a temporary state of affairs. I will come back to 'serious' reading, I promise!