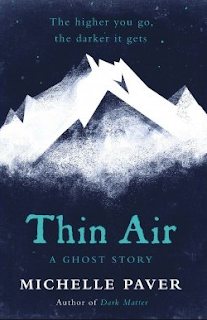 Borrowed from a friend at book group, Michelle Paver's Thin Air is a ghost story set on a 1935 expedition to climb Kangchenjunga in the Himalayas. For many years thought to be the world's highest mountain, it was relegated to third place only in the 1850s. I was familiar with Kangchenjunga from references in the Swallows and Amazons books, where the hills of the Lake District that the children climb and camp among are promoted to Himalayan status.

This was a wonderfully creepy and atmospheric tale, blending the isolation and terror of the natural geography with the all too human horrors of jealousy, betrayal, rivalry, suspicion and paranoia. The expedition is following in the footsteps of a former, ill-fated trek, and it gradually becomes apparent that something sinister has been left behind on the mountain...

Apparently Paver has written a couple of other ghostly stories, Dark Matter and Without Charity, so I might just hunt those out too. This was enjoyably scary, but not so terrifying that I couldn't bear it!

And just as I was writing this post, a fellow who gives ghost tours of Melbourne happened to come on the radio... Spooky!