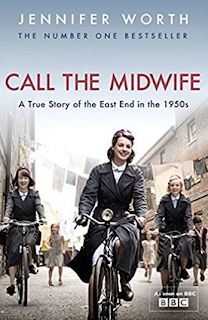 The television series of Call the Midwife, based on the memoirs by Jennifer Worth, was dropped into an early evening weekend time-slot on the ABC -- the traditional home of quirky, sentimental dramas. And while the world of Call the Midwife does have its share of quirk, and sentiment too, it also contains much grimmer social realism and a glimpse of a life that has now disappeared (in the UK at least).

Worth writes of two neglected subjects. Firstly, she describes the hardships of daily life in the dockland suburbs of post-war London, places like Poplar, the Isle of Dogs, Millwall, Stepney and Limehouse, where tenements housed families of ten or twelve in two rooms, some without running water or sanitation. And secondly, she writes in fascinating (some might say gruesome) detail about the vocation of midwifery. As she asks in her introduction, why are there not more memoirs by midwives? There are plenty by doctors and nurses, but few dealing with this most intimate, joyful, and dangerous of professions. Perhaps because it's still seen as 'women's business'?

While there are humorous stories here, and characters familiar from the TV series, like towering, posh Chummie, earthy Sister Evangelina, and dotty Sister Monica Joan, Worth doesn't shy from the darker side of her work in the slums -- prostitution, violence, the legacy of the workhouse, deprivation and despair. The mixture of light and shade is utterly engaging; Call the Midwife is a thoroughly readable memoir, and I'm not surprised it's been so successful.
Posted by A latte beckons at 2:20 PM