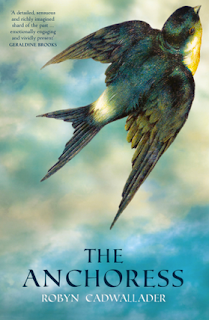 Robyn Cadwallader's The Anchoress has been on my radar since its release a couple of years ago. I love reading about nuns; one of my favourite books at high school was This House of Brede by Rumer Godden.

The anchoress of the title is a kind of super-nun, not just committing herself to poverty, obedience and chastity, but renouncing the world entirely, vowing to live out her life of prayer and contemplation alone in a tiny, windowless stone cell attached to the side of the church. I must admit that when the demands of family and the modern world become too much, I can totally see the appeal of such a solitary, scholarly life!

But Sarah has other reasons apart from piety to wish for enclosure, and she doesn't find it so easy to separate herself from the outside world, or the demands of her body. Paradoxically, the sensory deprivation of her cell leads to enhanced sensitivity, from the subtle tastes of her bland food, the noises of village chatter and birdsong, to the touch of stone and paper. Like it or not, she is part of the village. Forbidden to speak to men (apart from priests), she is sought out by the village women for counsel or just a sympathetic ear. She is also haunted by the imagined ghosts of her predecessors -- holy Agnes and rebellious Isabella, who broke her vows. In the end, Sarah finds a middle way somewhere between the two.

You might think that reading about a woman shut up in a room would be about as interesting as watching paint dry. How wrong you would be. The tiny details of Sarah's daily existence become as significant to the reader as they are to her, and we are also privy to the wider politics of church and estate that make Sarah the centre of power struggles. I did wonder whether the 13th century villagers would be able to articulate their sense of unfairness with their lot as openly as they do here; but perhaps it's impossible to reproduce a medieval mindset that a modern reader would be able to comprehend.

A great, and unexpectedly absorbing read from an Australian author.
Posted by A latte beckons at 10:47 AM