The Moon of Gomrath 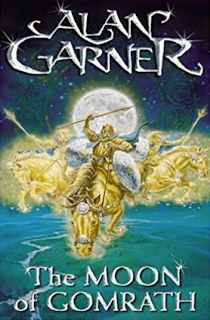 It was a fascinating exercise, after reading Alan Garner's Boneland, to return to the previous book in the series, written more than fifty years before. The Moon of Gomrath was first published in 1963; my edition is from 2002. (I say 'return' but in fact I don't think I have ever read this book before, though I'm sure I've read The Weirdstone of Brisingamen, the first volume of the trilogy.)

The Moon of Gomrath and Boneland, separated by decades, are very different in style. Boneland is an adult's book, spare, powerful, layered with meaning, but so stripped back it's almost like deciphering poetry. In contrast, Gomrath is high fantasy, with elves and dwarves, a wizard and a witch, who speak in heightened language. 'Are we to talk until all that has ever slept has woken?' That kind of thing. The two children, Colin and Susan, remain largely blank ciphers. They are brave, curious, rescourceful, as required by the story, but as people they remain utterly opaque.

I'm glad I read Gomrath as it illuminated several elements of Boneland -- Colin's memories of being held prisoner by the Morrigan, the witch-figure of the early books (who may be revealed as a more complex figure in the last volume), his hatred of rhodedendrons, and of course the familiar landscape, which is simultaneously concrete and numinous.

In Boneland, Colin has been left behind to cope with the tumultuous events of the first two books. There is a theory that story that unfolds in these books is actually the attempt of a juvenile Colin to make sense of a more prosaic disappearance of his sister. It's an intriguing idea, but I'm not sure I buy it!

I don't think I'll seek out The Weirdstone. Garner himself has described it as 'a fairly bad book' and when I picked it up a few years ago I was dismayed at the first few pages. If it falls my way, I'll take another look, for the sake of Boneland, but otherwise I'll let it lie.
Posted by A latte beckons at 10:26 AM