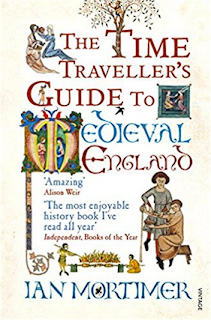 A hugely entertaining concept, executed in perfect, chatty style. Ian Mortimer's Time Traveller's Guide to Medieval England provides a tourist's handbook to the fourteenth century, focusing on the details of everyday life -- food, clothing, what you can expect to see in a town, the sights of London (mostly gone now), the perils of medical attention, how the legal system works and much more.

This book gives a terrific overview of medieval English society and beliefs, but it's also packed with fascinating titbits. None of those sturdy peasant folk would have worn any knitted garments, because knitting hadn't been invented yet. Rabbits were only introduced to England in the twelfth century! No potatoes, tomatoes or (surprisingly to me) carrots. English wine was made until the end of the century when the weather changed. The Black Death, mid-century, turned the feudal structure on its head as villages were deserted, lords competed for scarce labour, and a whole country mourned the loss of a quarter of the population. Men's clothes underwent a complete transformation over a hundred years, from long formless sacks to tight, short, sexy doublets and hose; meanwhile, women's fashions stayed almost static! That must be the last time in Western history that's happened.

Finally, one of those strange coincidences that often occur in my reading journey: the last chapter, on literature, contained a discussion of the anonymous Gawain poet. As it happens, this poet and two of his poems, Gawain and The Green Knight and Pearl, were discussed on the Guardian reading group thread in the context of Alan Garner's Boneland, which contains many allusions to both poems for those who were alert to them. Funny how these links pop up so unexpectedly!

I raced through this book at top speed, learned heaps and had a wonderfully enjoyable trip to the Middle Ages.