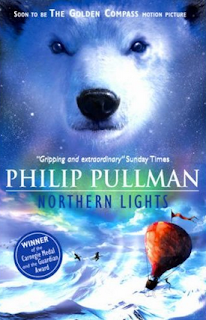 ... and the next book to reach the finish line was Northern Lights, which I picked up after reading La Belle Sauvage, which is a prequel to this first volume of His Dark Materials (confused?)

I read this years and years ago when it first came out but I had never reread it. The story came back to me in patches and occasional vivid images, though there were whole sections I had completely forgotten. As always, the business of Dust confused me (despite the primer of La Belle Sauvage, which did help a bit). Lyra is obviously intended to be a vivid, feisty, courageous character, but somehow she never quite came to life for me. The armoured bear Iorek Byrnison, on the other hand, is a fabulous, magnificent creation! I was pleasantly surprised to discover a couple of characters from the earlier/later book, ie Hannah Relf and Farder Coram (who seems like a completely different person). Hannah Relf must come into more later in the trilogy (I forget) because she does nothing in this book except be 'elderly' which I don't think she was in LBS.

When Alice and Evie saw me reading this, they both had comments to make.
Evie: Oh, I remember that book, it was boring and confusing and I never understood what was happening. I only wanted to read it because it had an animal on the cover. [Prob my fault, I think I gave it to her too early.]
Alice: It was terrible, it was SO SAD! I wanted an animal buddy, and then they CUT THEM APART.

So anyway, it made an impression.