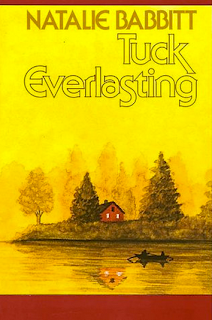 I had never read this 1975 American classic, though I know it's a popular set text for primary schools, and Evie is familiar with the musical version. It was a quick and easy read, divided into very short chapters, and with a simple and straightforward story that nonetheless raises some big ideas.

Young Winnie Foster encounters a friendly family and learns their tightly-kept secret -- they have accidentally drunk from a magical spring which has given them eternal life. They will never grow older, and never die. For me, the most interesting aspect of the tale lies in Winnie's attraction to the youngest son, Jesse, who offers to share the gift with her when she turns seventeen -- though she finds it pretty easy to refuse. The book is a reflection on the pattern of life -- the Power of Becoming, as the Tremaris books would have it -- birth, change, aging and death. The Tucks have been removed from this cycle, and so their lives have become meaningless.

I don't know if I'm entirely convinced by the book's argument, but certainly I wouldn't want to live forever either, and I'm pretty sure that Winnie made the right decision.