The Mitfords: Letters Between Six Sisters 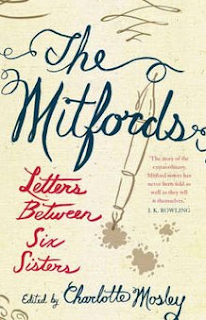 I came across The Mitfords: Letters Between Six Sisters months ago in a second hand bookshop in Sydney - at over 800 pages, it was way too heavy to bring home!
'Haven't you got that one already?' asked Michael. 'Didn't you have that in St Kilda?'
'No, no,' I said. 'That was letters between Nancy and Evelyn Waugh [mysteriously went missing, long story, I was very cross]. I don't have this one.'

So when I found it again on Brotherhood Books, I bought it, and I've spent many happy hours in this hot week trawling through the correspondence between these fascinating, complicated, witty, sometimes cruel, sometimes deeply touching sisters, who led such varied and intriguing lives and spanned almost the whole of the twentieth century.

From Nancy, successful novelist but unlucky in love, to Pamela, food and dog-loving countrywoman, to Diana who scandalously left her husband to marry Oswald Mosley, leader of the British fascists (they were both imprisoned during the war); to poor Unity, who loved Hitler and tried unsuccessfully to kill herself when war was declared, to Jessica, a socialist who ran away to America and became a 'muckraking' writer, her life marked by personal tragedies, to Deborah, the Duchess of Devonshire, who turned Chatsworth estate into a successful tourist enterprise. Between them, the Mitford sisters seem to have crossed paths with almost every noteworthy character of the twentieth century.

Sometimes I find them exasperating, racist, conservative, snobbish, judgmental, bitchy. Sometimes I can hear the voices of my English aunts. But whatever I think of their politics or their personal lives, I keep being drawn back to the Mitfords because they are simply wonderfully entertaining company. And I imagine that is why people adored them in real life, too.

Halfway through this very weighty volume, I was sorting through my bookshelves when I discovered an overlooked volume:

Yes, it's the same book, different cover. Dark spine rather than light spine. I had it all along. No wonder some of those letters seemed familiar. To misquote the title of one of Nancy's novels: Don't Tell Michael.
Posted by A latte beckons at 11:14 AM