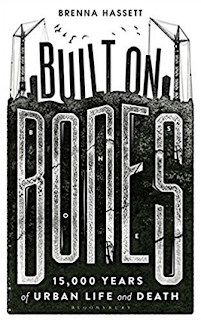 The trouble is, I've been reading three books at once -- since I found each of them individually, for different reasons, too much to tackle in one hit, I've been reading a chapter from each in turn. Which has slowed down my rate of book consumption considerably!

First one completed was Brenna Hassett's Built On Bones, which Evie thought I would enjoy for Christmas, all about the lethal consequences for the human race of settling down into agriculture and cities from a hunting and gathering life (particularly interesting to read after Dark Emu -- unfortunately Hassett, a bioarchaelogist, has Not One Word to say about Australia!) After discussions of plague, violence, domestic animals and sexually transmitted disease, Hassett's conclusion is that the real killer is inequality, which urbanisation facilitates (the shift from shamans to temple priests etc). However, she ends on the optimistic note that living in cities, which encourages specialisation, also encourages adaptability, and she is sure we can adapt our way out of our problems.

It took me a while to adapt to Hassett's style, which is part breezy American and part dry English irony, with much heavy academic detail leavened by lame jokes in the footnotes. But I did learn a huge amount about the history of cities, agriculture, and archaeology, which is a good thing.