The Shape of Three 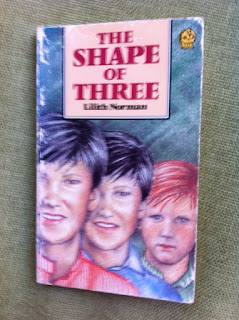 Excuse the ropy photo: couldn't find one on the internet and the dog jiggled me as I was taking this one. I've never read any Lilith Norman books, but I was alerted to her by a reference to a novel of hers called The Fire Takers which is about some supernatural force sucking the creativity out of an artistic family -- that sounds interesting! I see now that she once worked under Patricia Wrightson at The School Magazine, and that she died last year, aged 90.

Anyway, The Shape of Three is not all supernatural. Written in 1971, it concerns two Australian families whose lives painfully collide, entangle and then fall apart when it's discovered that two of their children were accidentally swapped at birth (not a spoiler -- the reader guesses this on the very first page, then has to wait about four chapters for everyone else to catch up).

This book, despite its rich premise, has dated very badly. There is legal action, off screen, but the decision to swap the two boys back is apparently taken without any support or assistance from any agency -- I can't imagine this happening today without an army of psychologists, social workers, school counsellors and other support services being involved. The boys' respective schools aren't even told what's going on, and the only counselling one of the boys receives is a brief chat with a local priest (in itself probably not likely to happen these days without an observer present!)

File this one under Interesting Curio.
Posted by A latte beckons at 11:26 AM