Stranger In The House 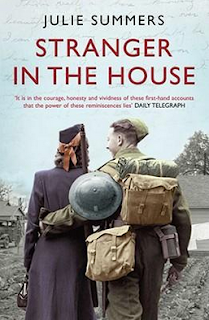 Stranger In The House makes an interesting companion read to Julie Summers' book on the Women's Institute, Jambusters. This earlier book is shorter and less densely packed with research, but makes up for it with its moving first-hand stories from women who had to cope with either the loss of their men during World War II, or their return, irreparably changed: mothers, widows, wives, children and grand-children. Some men were physically wounded, most were psychologically affected. Some couples found the disruption of the war years impossible to adjust to. Hardest hit were the prisoners of war, particularly the prisoners of the Japanese.

Every year when Anzac Day rolls around, I'm prompted to reflect on what those big wars mean to me. I don't have a relative who fought or was any way involved in combat. It's startling to realise that when I was born, the end of WWII was far closer than my university years are to me now -- and they seem like only yesterday.

Sometimes it feels as if Australia's participation in the First and Second World Wars (especially the First) is our nation's only history -- or at least the only portion of our history which we are prepared to face and explore head-on. Pre-settlement history is largely a blank to most Australians; the post-invasion century is largely too painful to be honestly examined. But we can be proud of our diggers, and more proud, weirdly, when they lost (eg Gallipoli) -- because they were valiant without actually defeating anyone? I don't know.

Anyway, these British women were certainly valiant too, and so were the Australian women who shared the same experience, shockingly without any official support or assistance. Most suffered and coped in silence. Speaking of university days, it was nice to see the work of a friend from long ago, Dr Joy Damousi from Melbourne Uni, cited by Summers.