We Are At War 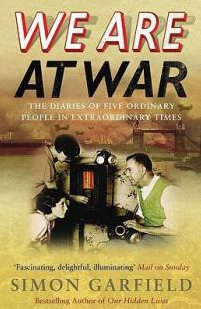 Subtitled The Diaries of Five Ordinary People in Extraordinary Times, We Are At War arose out of a (still-ongoing) UK project called Mass Observation, where citizens from all walks of life were encouraged to keep detailed diaries of their daily lives. From this wealth of raw material, editor Simon Garfield has crafted a chronicle of the beginning of the Second World War as it appeared to five British observers. Tilly is a middle-class mother of young children; Maggie a bohemian writer; Pamela a sceptical Glasgow office worker; Christopher a highly strung Catholic notepaper salesman; and Eileen works as a London evacuation officer, overseeing the removal of children to safety in the country.

Today, with the narrative of WWII so firmly decided (Churchill's a hero, Hitler the epitome of evil, Dunkirk a miracle), it's almost unsettling to read these diary extracts written in the muddle and confusion of unfolding events. Particularly early on, some of our diarists maintain that Hitler has his good points and that Britain could do with a dictator of their own. There is open anti-Semitism, even toward refugees from the Nazis, and Italians living in the UK have their shops smashed. Dunkirk, now familiar to us by its shorthand name, is referred to as 'the evacuation' (remember 2001, before we decided to call the bombing of the World Trade Centre and the Pentagon simply '9/11'?)

This volume only covers the first year or so of the war, ending just after the Blitz sets in. And for our diarists, despite the fear and uncertainty, it's often domestic concerns that preoccupy them -- how many tins to buy, how to protect their windows from the possibility of bombing, whether it's worth getting out of bed when the air raid siren sounds, how to repay money owing. Life goes on.

I'm convinced that Anthony Horowitz  must have studied the Mass Observation diaries when he was researching Foyle's War. They provide a unique and vivid snapshot of the immediate experience of a nation at war -- not remembered afterwards, distilled into anecdote or agreed attitudes, but as they felt at the time. Fascinating and sometimes disconcerting stuff.