Whose Body? and The Unpleasantness at the Bellona Club 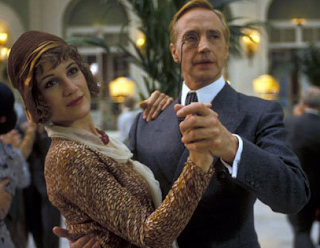 I couldn't find an online image of the particular Dorothy L Sayers omnibus I bought from Brotherhood Books, so I've chosen a picture that most closely corresponds to my private mental picture of Lord Peter Wimsey, the titled detective -- this is from a 1987 BBC adaptation which somehow passed me by completely! (I was at uni in 1987 and not paying attention, clearly.) This photo shows Edward Petherbridge and Harriet Walter as Lord Peter and Harriet Vane. It looks well cast -- I think I'll have to do some digging.

Back to the books. When I was at high school, in the thick of my Brideshead/ Nancy Mitford/ All Creatures phase, I absolutely adored Lord Peter Wimsey and read all his adventures I could lay my hands on (there are eleven novels in total). This omnibus contains the first four,* and I raced through Whose Body? and The Unpleasantness at the Bellona Club while I was in Ballarat recently, doing a two-day school visit. There could be nothing better to relax with after an exhausting day, though Lord Peter himself in his earliest iteration is quite irritating at times -- Sayers toned him down as the series went on.

Of course the books are terribly dated in some ways. Again with the gratuitous anti-Semitism! What's the story? And Lord Peter is the very peak of white male privilege (but at least he knows it). But the puzzles are clever, and I always enjoyed all the literary and historical allusions. No dumbing down for Sayers; these mysteries are an intellectual pleasure, not a gritty or violent peek into the criminal underworld.

The best novels are the ones after Wimsey meets and falls in love with Harriet Vane, whom he saves from a murder conviction. They are a fantastic pair. As a writer of detective fiction, she is as smart as he is, and he loves her character as much as her looks. As a smart but horribly plain adolescent, I found this wonderfully comforting. They are the kind of couple who do the crossword together in bed!

Despite their shortcomings, I'm thrilled to have rediscovered the Wimsey novels, and I will be devouring them all over again (in order this time, hopefully).

*EDIT: So it turns out this omnibus doesn't contain the first four novels -- it's four random ones. Between these two books fall Clouds of Witness and Unnatural Death. So now I'll have to try to fill in the gaps myself. Grr!
Posted by A latte beckons at 10:40 AM