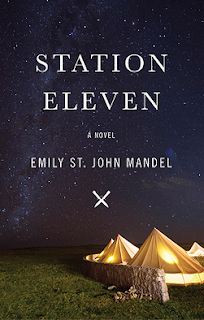 I'm not a huge fan of dystopian novels (though I did enjoy The Girl With All The Gifts), but Station Eleven, by Canadian author Emily St John Mandel, was recommended (and lent to me) by Kirsty Murray, whose judgement I trust. As usual, she knew what she was talking about!

I may not be fond of dystopias, but I do love interlocking stories, and novels where characters brush past each other and wander in and out of each other's lives. It was a strange echo of King of Shadows that Station Eleven opened with a performance of King Lear, in which the lead actor, Arthur Leander, dies on stage. This event occurs a few days before a real catastrophe hits -- an outbreak of a deadly flu which spreads so swiftly that it soon extinguishes almost every human on Earth. The novel follows several characters who are all connected to Arthur in some way -- his first ex-wife, a child actress in the same play, the man who tries to save his life, his old friend. Their experiences weave in and out of the narrative, crossing and re-crossing, tied together strangely by a comic book created by Arthur's first wife.

As apocalypses go, the "Georgia Flu" is a relatively gentle one. Death is swift and not too painful, and while it's hinted that the first year after the epidemic was brutal and horrific, we don't see much of that. Violence intrudes only at the end of the novel. Mind you, this is set mostly in Canada; I can imagine that south of the border, things might have been a lot worse: all those guns and doomsday preppers! It was good to read a story set in an unfamiliar (to me) landscape -- Toronto and the Great Lakes -- which was an excuse to run to Google Maps and orient myself.

An excellent read, but if you're looking for horrors, look elsewhere.
Posted by A latte beckons at 11:23 AM