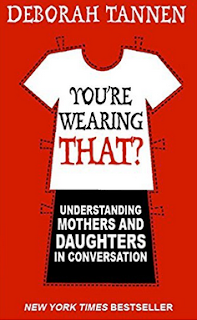 As a mother of daughters and sharing a house with my own mother, and as a long time guilty fan of pop psych hand books, how could I resist You're Wearing That? Understanding Mothers and Daughters in Conversation by Deborah Tannen when it appeared on Brotherhood Books?

All my life, if things were going right or if they were going wrong, it's been my mother I'd long to talk to about stuff. As this book points out, who else is going to be equally interested in your new pair of socks or your broken heart? Now we live together and our paths cross daily, it's even more important to carve out time for conversation (I like to sit down for a morning coffee with Mum before our days begin). Luckily for me, the three contentious issues that often arise between mothers and daughters, according to Tannen, namely hair, clothes and weight, have never posed a problem for us. My mother is smart enough to know when to keep her mouth shut -- mostly.

The only time I didn't really tell my mother in excruciating detail what was happening in my life was as a young adult, partly to safeguard my new-found independence, partly because I didn't want to worry her. I can already see my own daughters' impulse to protect me from concern. And honestly, perhaps there are things I would rather not know.

The chief source of conversational conflict between mothers and daughters is a contradictory pull between control and connection. This makes a lot of sense to me. Mothers tend to underestimate their own power over their daughters -- maybe not to actually influence their behaviour, but certainly to affect how they feel. At the end of the day, most daughters are seeking their mother's praise, acceptance and approval -- not their advice, no matter how sensible, and not their unvarnished opinions! I think I would be wise to remember that.
Posted by A latte beckons at 10:07 AM