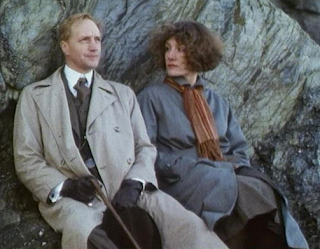 Once again, unable to find a picture of my own copy of Dorothy L Sayers' Have His Carcase, I've stolen an image from the  BBC series, which surely shows Lord Peter and Harriet Vane looking for clues on the beach, the scene of the crime. I'd really love to have seen this series, this is exactly how I imagine Peter and Harriet.

Have His Carcase comes before The Nine Tailors, but I forgot it was tucked away on my shelves. Now this one I remember well -- I must have re-read it a few times, and I remembered the twist at the end perfectly. The series does catch a new lease of life once Harriet Vane appears, and I really enjoy the interactions between her and Peter. The key is that they WORK together so well; they respect each other's intellect as well as fancying each other, and they obviously just enjoy each other's company -- not a bad romantic model. (This from someone who married her boss -- ahem!) I love the way Peter clearly adores Harriet ('By the way, will you marry me?'), and she briskly fobs him off ('No, thank you'), though there is a lot of angst under the surface which we are only allowed to briefly glimpse -- no wallowing here! (Peter has previously rescued Harriet from a false charge of murder, thereby saving her life.) Of course Harriet is a stand-in for Sayers herself (a novelist of detective fiction, no less) but who cares.

Lots of confusing stuff about ciphers and alibis, which is slightly better than train timetables, but it's the relationship between the sleuths that holds this one together.